Health Supply US, a Medical Supply Manufacturer, announced in June they will be opening a manufacturing facility in Greenville County. Creating over 600 new jobs and investing more than $150 million over the next 5 years. Their primary focus is the manufacturing over 4.3 billion American-made nitrile gloves annually.  Health Supply US holds the ability to triple production within their current plan.  The Greenville County facility will operate as Glove One.  Located at 1 Quality Way, next to Beechtree Business Park, the building will provide approximately 400,000 square feet of industrial manufacturing and distribution space.  This announcement comes on the shoulders of the fastest growing industry in South Carolina, life sciences. The life sciences industry employs 87,000 South Carolinians in 42 of the 46 counties in our state!

The City of Greenville held the highly anticipated Grand Opening for the new 60-acre Unity Park on May 19th, 2022.

To start, there are three pedestrian bridges. One of the bridges, named The Auro Bridge, reaches over the Reedy River in the middle of the park. 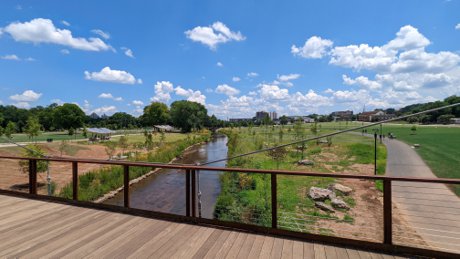 Running along both sides of the Ready River, the new park contains five additional looped walking trails as an extension of The Swamp Rabbit Trail, adding 2.5 miles.

The Lila Mae Brock Plaza, whose namesake was a leader of the Southernside neighborhood that worked to address poverty, hunger, crime, and neglect; as well as opening housing for seniors and the disabled, features a 7’ bronze statue of Brock in honor of her services to the community.

The two expansive green spaces are names Michelin Green and Meadowbrook Green. The latter named for the historic Meadowbrook Park built on the site in 1938.

With a little something for everyone to choose from, the park features continue to include seven bike rack stations located throughout the park, 362 parking spaces, covered picnic tables, a first-aid station, basketball courts and an historic baseball field situated on the site of the circa 1925 Mayberry Park.

Four Playgrounds!  A 4,100-square-foot splash pad with over 40 jets is surrounded by boulders to lounge on and includes a toddler area. The pad is open 9 a.m. to 8 p.m. However, it is turned off for rainy days, including scattered showers. 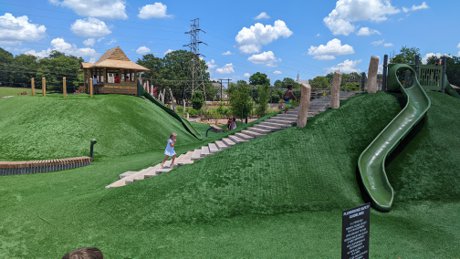 The Ann Watson Trotter Memorial Garden is 9,400 square feet, with swings, a climbing wall, and a storytelling circle. 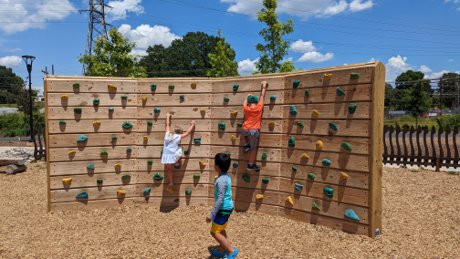 Donovan Playground is 13,200 square feet, measuring about the size of an Olympic-size swimming pool! It holds an all-in-one play structure, a custom log bridge, swings, teeter-totters, auditory/sensory equipment, and a giant green salamander play sculpture. There are even musical elements in the toddler playground and specialized equipment for children with disabilities like overhead restraints for swings and a transfer station with grab bars.

An interesting thing of note is the park’s construction has involved the replacement of existing soil with soil containing a higher percentage of sand to help prevent erosion. Additionally, replacement of invasive tree species is included in the efforts to restore the native environment.

A wetlands area on the park’s northern perimeter, where the original path of the Reedy River was, is to be restored and will feature low impact boardwalks so the native environment can be observed.

The wetlands boardwalk and an observation tower are part of the second phase of construction.

Towards the end of May 2022, Greenville City Council passed a vote for final approval to build an observation tower in Unity Park. The tower will be named Honor Tower in recognition of first responders such as police officers and firefighters, as well as military personnel.

FREE WEEKEND TROLLEY service to Unity Park is available: Pick up is available at three locations downtown - the Transit Center on McBee, Richardson and West North Street or Heritage Green. The service runs Friday from 4-11 p.m., Saturday from 10 a.m. - 11 p.m. and Sunday from 10 a.m. - 8 p.m. 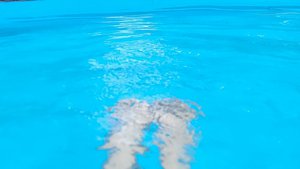 Summer is most definitely here! A heat wave came across most of the US in June and South Carolina was no exception. With highs mostly above 90 degrees, and even into triple digits a few times, many Greenville residents are living their best lives pool side. It has been a fairly dry start to the summer, with rain blowing through less than 10 days in June. July is predicted to bring more rain with average highs around 90 degrees.